Where to find me and other stories I make

August 24, 2021 | JCorrachComics
Heyo, I had a couple people asking where to check when I make new things, and rather than posting a blog here whenever that happens, I've made a hub site where you can follow along as comics are being created!

It's going to act as a place to collect and display completed works, show progress timelines and where I'm at in current stories, launch date announcements, concept art, early drafts and deleted scenes. I'm still going to be posting updates on my twitter as well, but the hub site allows me a lot more wiggle room with formatting, and is much easier to navigate

If you're interested, the link is here! It's hosted through comicfury, so you can subscribe and be notified when news and other things get posted

Hope to see you round, have a good night ✌️
0 Comments

April 9, 2021 | JCorrachComics
Ok unless I can pull a miracle here, todays page might have to wait til sunday, we only just got everything finalised and ready to go yesterday, and we begin loading the truck today!

it's going to be gruelling, but come sunday we should be off the boat safely and hooked back up to the net at the new place, so at the very least i can give some more words on where were at if the comic gets delayed again

Thank you guys so much for all your patience, hope things are going well on your end of things
2 Comments

February 19, 2021 | JCorrachComics
Heyo, you mightve seen me mentioning that were moving to another house earlier on twitter but yeah, the pressure is absolutely on right now. March 8th is the big day and it's coming up WAY faster than I thought it would

Sorry to be giving the heads up on such late notice, I really overestimated my ability to keep making creative stuff under this kind of stress and thought I'd be able to keep up! Here is what I'm going to do: since this week's page already has a decent chunk of work done, I'm going to post that next week on Feb. 26, then after that, regular weekly updates resume on March 12 (if something goes belly up and makes this impossible, i'll give notice on that as soon as i can, but we should have the net set up by then, and that doesnt effect how i draw)

See you at the new place o/
5 Comments

January 31, 2021 | JCorrachComics
One year ago today, I uploaded the first page of TREVOR, and while the original script with would've had this story wrapped up in a few months, I'm still going! The end is finally in sight, and I'm so excited to finish this project, thank you for reading along with me this year! 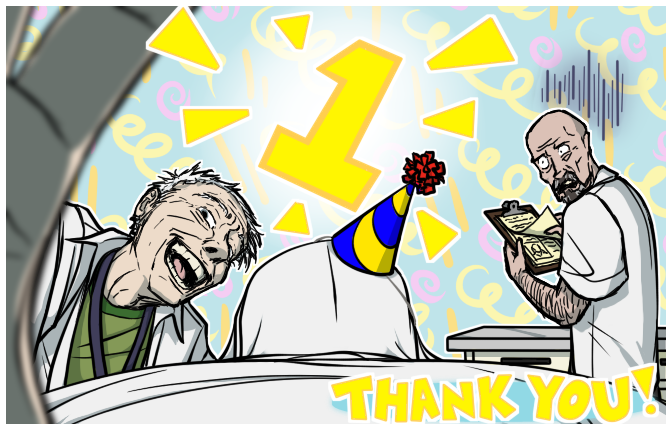 family death, no page this week

September 28, 2020 | JCorrachComics
its been rough

Page delay til next week

August 27, 2020 | JCorrachComics
Hi there, apologies that this weeks update is getting postponed! I have a story for you that you may find funny:

Most of the time I'm working on pages is planning and lineart, and lineart is where I really figure out the texture of things and that helps immensely when rendering softer details later in colour and shadow. Emphasis on the planning part, I have a ton of references that I look over and some I make on the fly

When in the planning stage before I started making TREVOR, I practised drawing the characters from different angles, I practised lighting and shadow effects, I practised expressions and body language, etc. a whole lot of things. But I somehow forgot to practise rendering visera. You know, the stuff thats going to be flying all over the panels? That stuff that I put the reader warnings in for, hoping not to ick someone on accident? The thing that I've been building up to?

Yeah, I don't know how I did this either

SO, I need a bit to practise here, but while I'm not ready to publish the next page just yet i AM catching on pretty quick on how to make these tissues work, and bend the rules to get it the way I want it to look. There is a lot I didn't know about the human body, for instance, I didn't know until a couple days ago that fingers dont have muscles along them, its just tendons! (if this is common knowledge pls dont laugh)

See you next friday, if you figured from my comments here that next page will be a bit gorey, you are correct! When that's the case, I'm going to make the content warning the default page that the website displays upon loading up, just to be safe. Hope y'all won't mind some extra clicking
7 Comments

Cameos: a contest, or a race?

April 27, 2020 | JCorrachComics
Heyo, it's getting pretty close to when I'll put out the casting call, but I just realised that I haven't gone about this in the best of ways! This is my first time doing this kind of thing, so please bare with me as I'm learning on the fly

So, I originally intended this to be a first-come/first-serve sort of deal, where I'd use the first designs submitted to me, and when planning this, I wanted to keep as many details hidden until the last minute so that people couldn't start working on something ahead of time and get an unfair advantage. But, I realise now that keeping the fc/fs nature of this thing hidden, I might have given the impression that there would be more of a traditional contest involved, and disappoint people that might have looked forward to having their design judged

I don't expect there to be a huge number of people clambering to make a design, or volunteering an oc for this comic, since it is a slasher, and true to the nature of the genre, said oc is going to get murdered on-screen (not canon to your story/universe, they'd be like actors playing a role), BUT I've seen some people draw wicked fast, and I'd hate to have someone's excitement ruined because they checked in too late and everything was already taken, you know? I know I would be, for sure, I'm passionate about weird junk

Anyways, I made a twitter poll asking for input, and since most people check in here on fridays, tell me your thoughts from now til friday evening, May 1st at 11pm, pst*: https://twitter.com/JCorrachComics/status/1254910480826548225
I'm also accepting feedback on here as well! If you're interested, let me know if you'd prefer a race or a contest, either replying to this blog entry, or really sending me a comment/pm anywhere I'm active (heres the links to all my social media and stuff: https://jcorrachcomics.tumblr.com/contacts )

The date I'll be posting the casting call, whether it be a race or a contest, is now saturday, May 2nd, 12pm, pst

* (the twitter poll expires before friday cos i screwed the day up, and i cant edit twitter posts sorry! but you can still vote here or anywhere else you can find me in the link above)
0 Comments

Added a "does the dog die" page

This is something that's always been important to me; I have cptsd, and it can make navigating fiction very difficult at times! I'm so sorry that i hadn't written this up until now, but I remembered to do it before the gore began at least, so I hope it will be helpful to those that need it

If you have something specific you want to ask about that I didn't mention on that page, or to clarify something I did, you can ask me here, on any of my social media, or send me an email at JCorrachComics@gmail.com

Thanks for reading!
0 Comments
Ad courtesy of the ComicFury Community Ads Thread